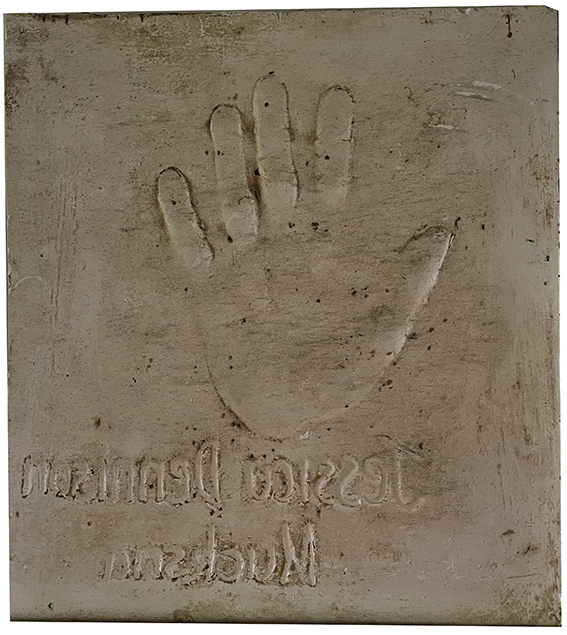 Background to the Project

In 2000 the Kenmare Chamber of Commerce initiated a project to record the handprints of all the primary school children in the town – mainly those at the town schools of St Clare’s Girls School and St Francis’ Boys School that were in the town centre and Cahir School on the Kilgarvan Road. The handprints were to be cast, first in plaster and then in cement and laid into the pavement outside the railings in The Square. They have since been lifted, cleaned and replaced inside the railings of the green, where hopefully they will get less wear and tear. A project is underway to research the people on the plaques and erect an information board in the green.

The potter Ross Taylor, who had a studio in Bridge Street in Kenmare at the time, was commissioned to make the plaster casts and children were called in by school at allotted times to add theirs.

After the plaster casts had been used to make the concrete slabs for the pavement in The Square, they were going to be destroyed and parents were given the opportunity to collect theirs, if they so wished. Jessica Dennison’s cast, which is shown here, with all her details in reverse, has been hanging on their kitchen wall ever since. I’m pleased to say that she still lives in Kenmare and her story will feature here, along with all the others, when the mapping is complete.

Are thoughts are with all the children who took part in this project, wherever they are in the world, and also to those who are sadly no longer with us – RIP.

In 2022, steps were taken to start mapping the concrete slabs in the Square and collect as many details of the children as possible. Some have already told their stories in the 2023 Kenmare Chronicle and we hope to be able to add to these and record them here as information comes to light.